After captivating audiences in 2013, White Night Melbourne is back.

Starting at 7pm on Saturday, 22 February 2014, Melbourne’s city streets, laneways, landmarks and cultural institutions will once again be transformed into a cultural playground from dusk-till-dawn.

White Night Melbourne 2014 will offer a mix of free and ticketed entertainment to appeal to everyone.

Inspired by Paris’ Nuit Blanche, the international network of White Night programs has grown to over 20 cities globally and Melbourne’s own unique interpretation of this worldwide phenomenon will capture your imagination.

Come discover or rediscover Melbourne, expect the unexpected and enjoy a night like no other.

There'll plenty to eat and drink, with many cafes and restaurants extending their hours, specially for White Night.

One of White Night's highlights will be The Pom Pom Project by Etsy in collaboration with the Centre for Adult Education (CAE).

Melburnians are invited to get arty and contribute to a giant pom pom sculpture as Etsy, the world’s handmade marketplace, hosts The Pom Pom Project during White Night.

More than 1,400 pom poms made from 80kg of white wool are expected to be created which will be formed into a growing circular structure to complete the planetoid artwork. Participants will also be encouraged to write personal messages of hope to accompany to their pom poms.

The completed sculpture will then be donated to an as yet undisclosed recipient.

The Pom Pom Project will be located in the event’s Rags to Riches Precinct, on the corner of Flinders Lane and Degraves Street.

Special guest instructors will help participants in their pom pom making efforts, and an instabooth will allow makers to share their creations online.

When: As part of White Night Melbourne, Saturday, 22 February 2014 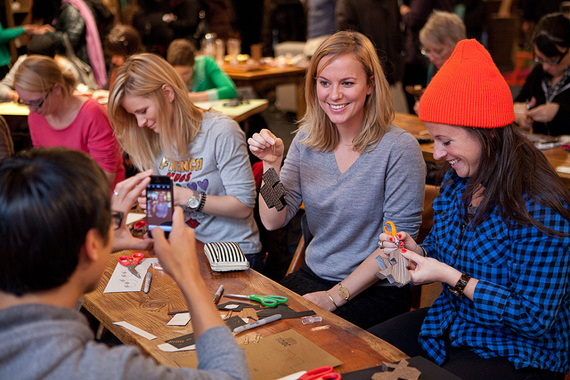